Murrayfield Ice Rink – One of the Fringe's Most Interesting Venues 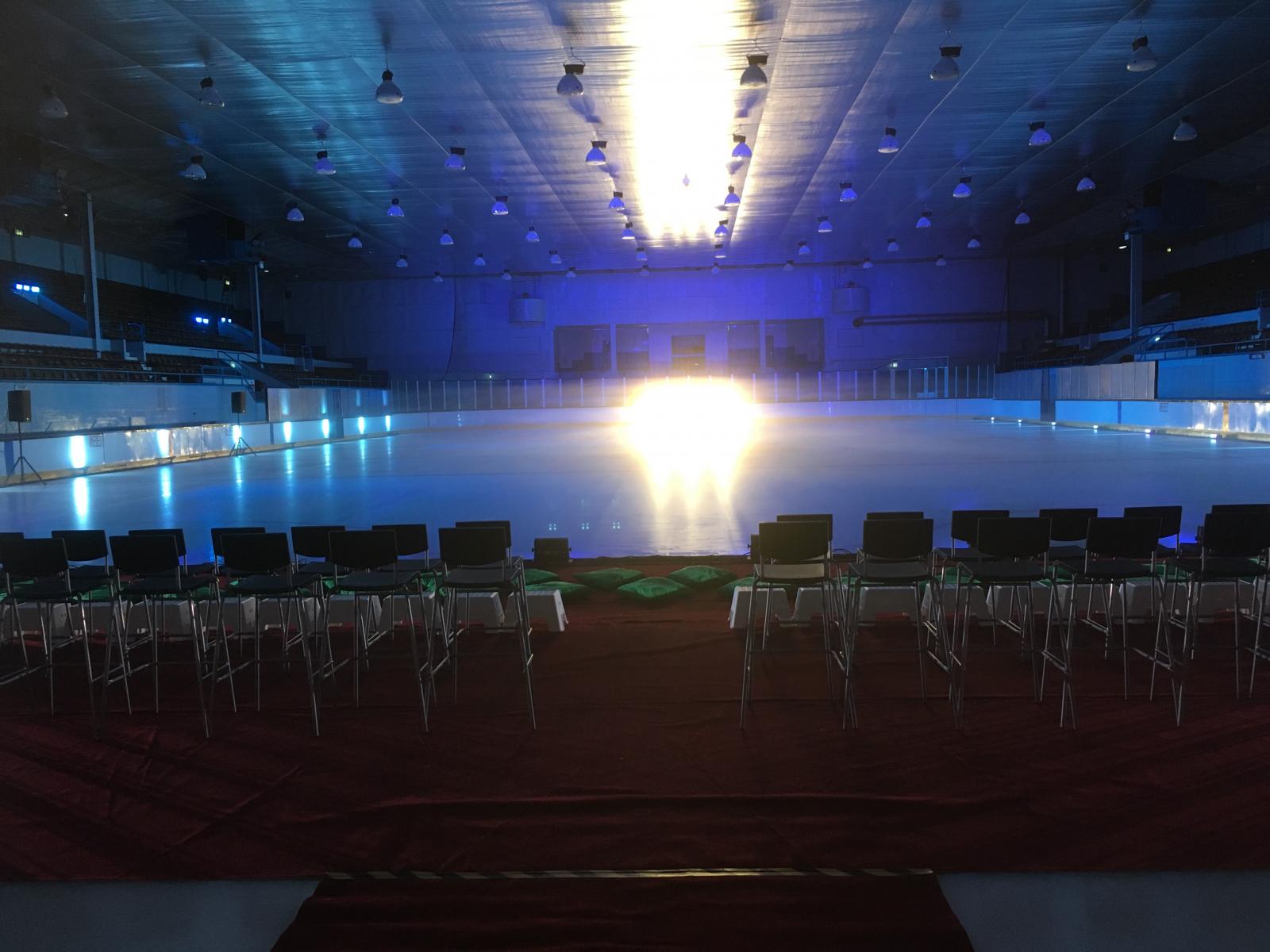 For the second part of Vertical Influences the audience sits on special seats installed directly on the ice. 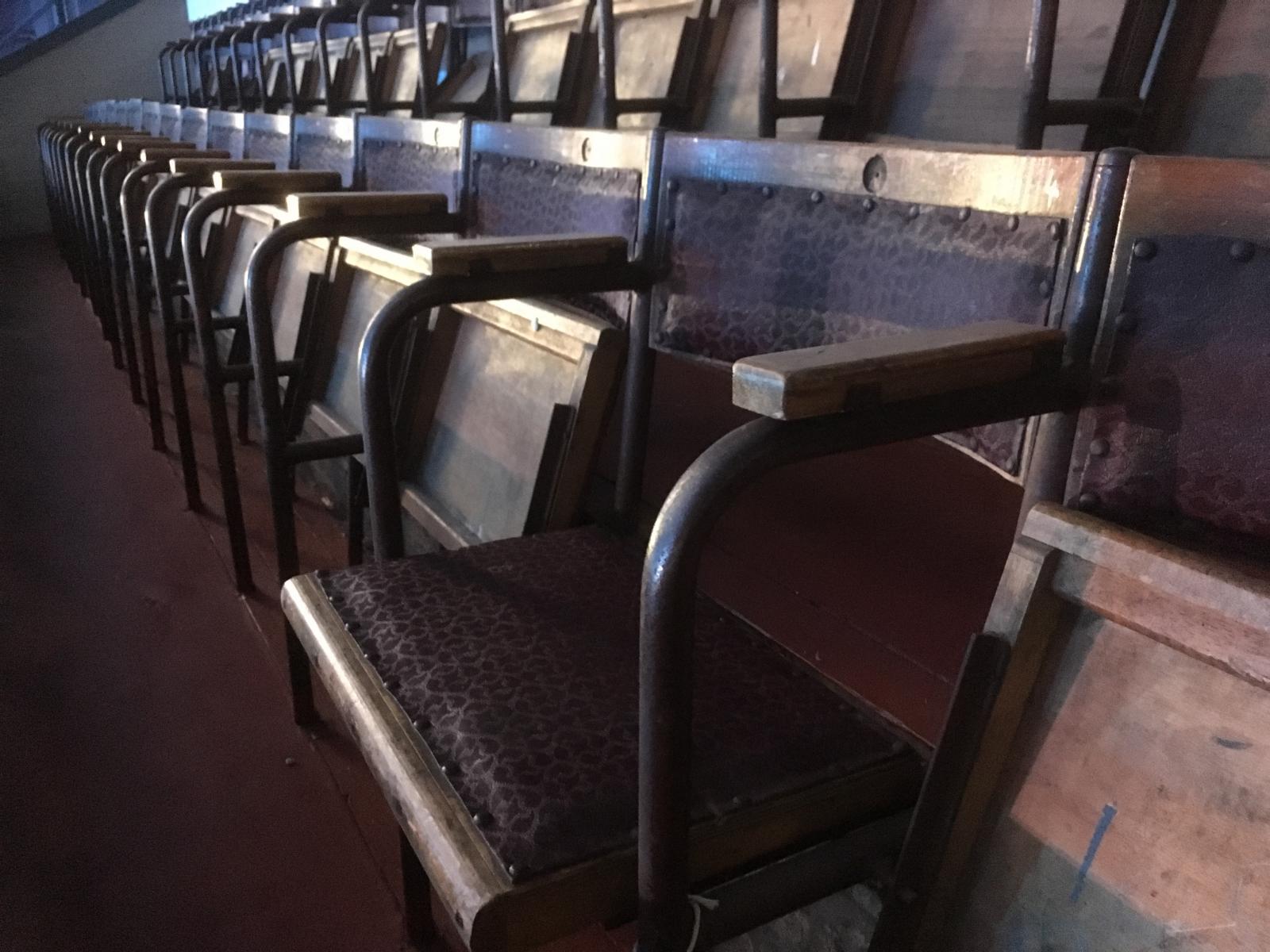 For the first part of Vertical Influences the audience sits in the original 1938 wood and leather seats protected by Scottish National Heritage. 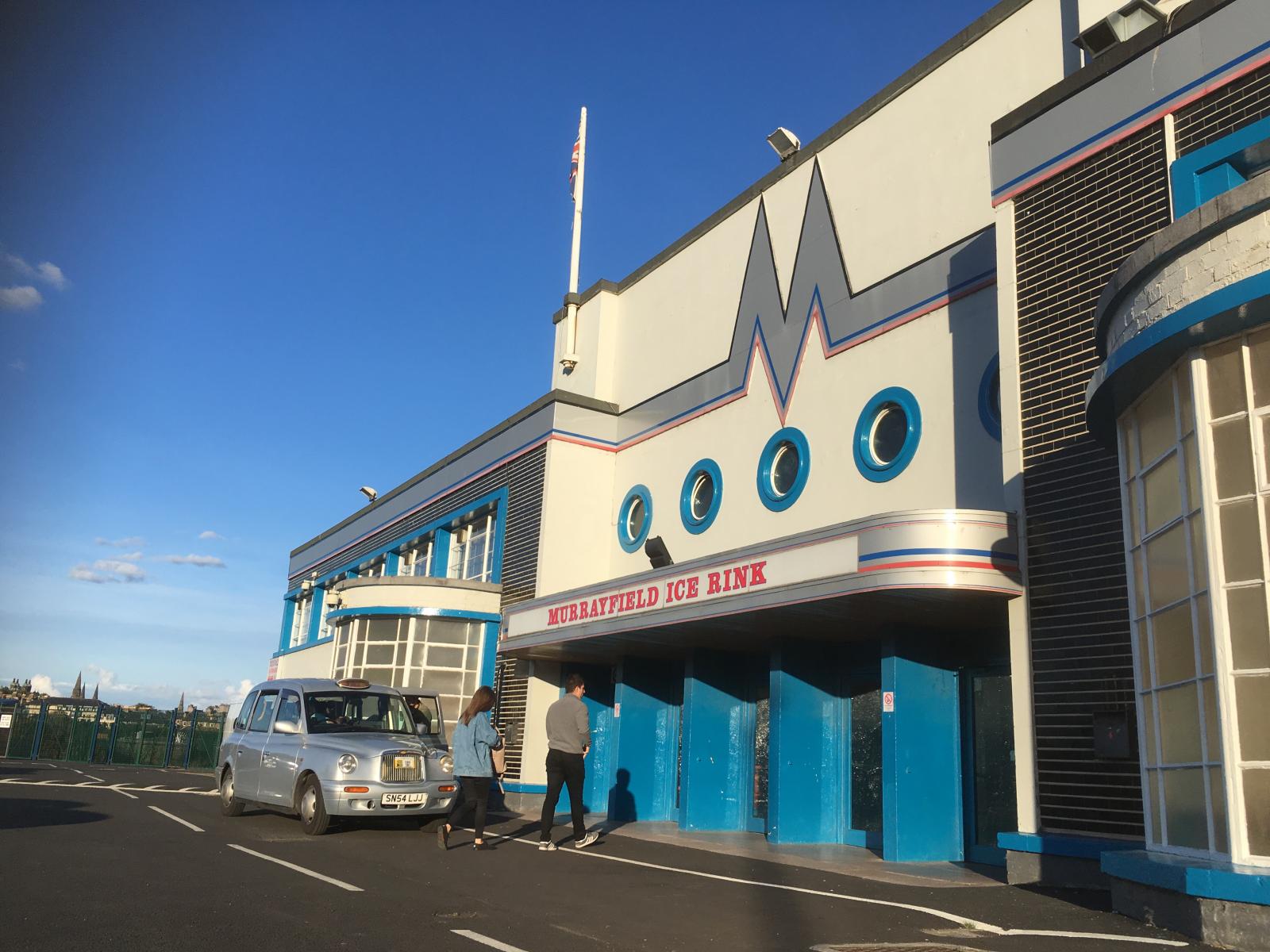 If you look closely at this picture of the facade of the ice rink, you will see Edinburgh Castle - it is not that far. 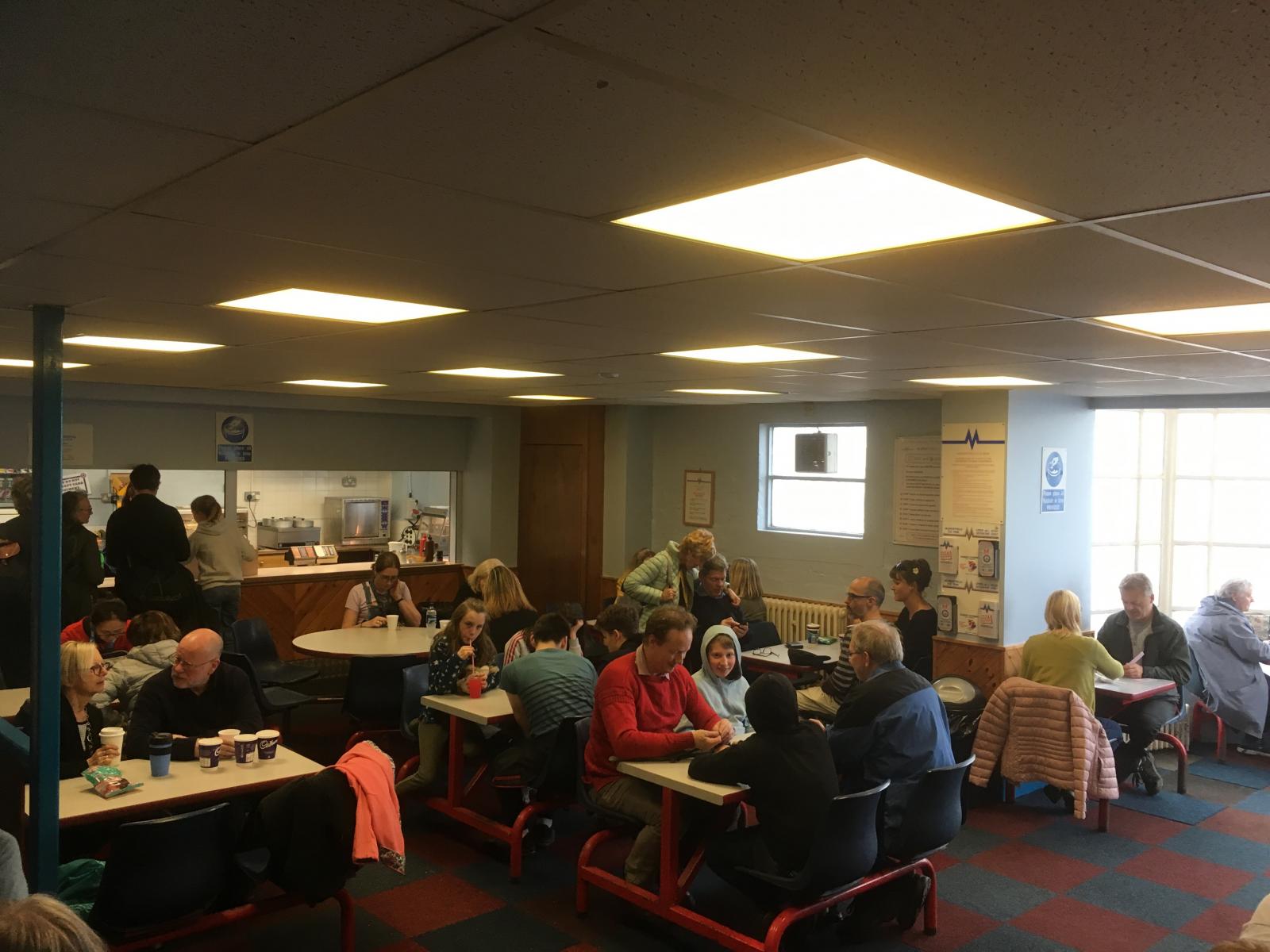 For a skater who grew up in ice rinks, it is extremely touching and beautiful to see an arts festival audience here - it feels comfy and calm 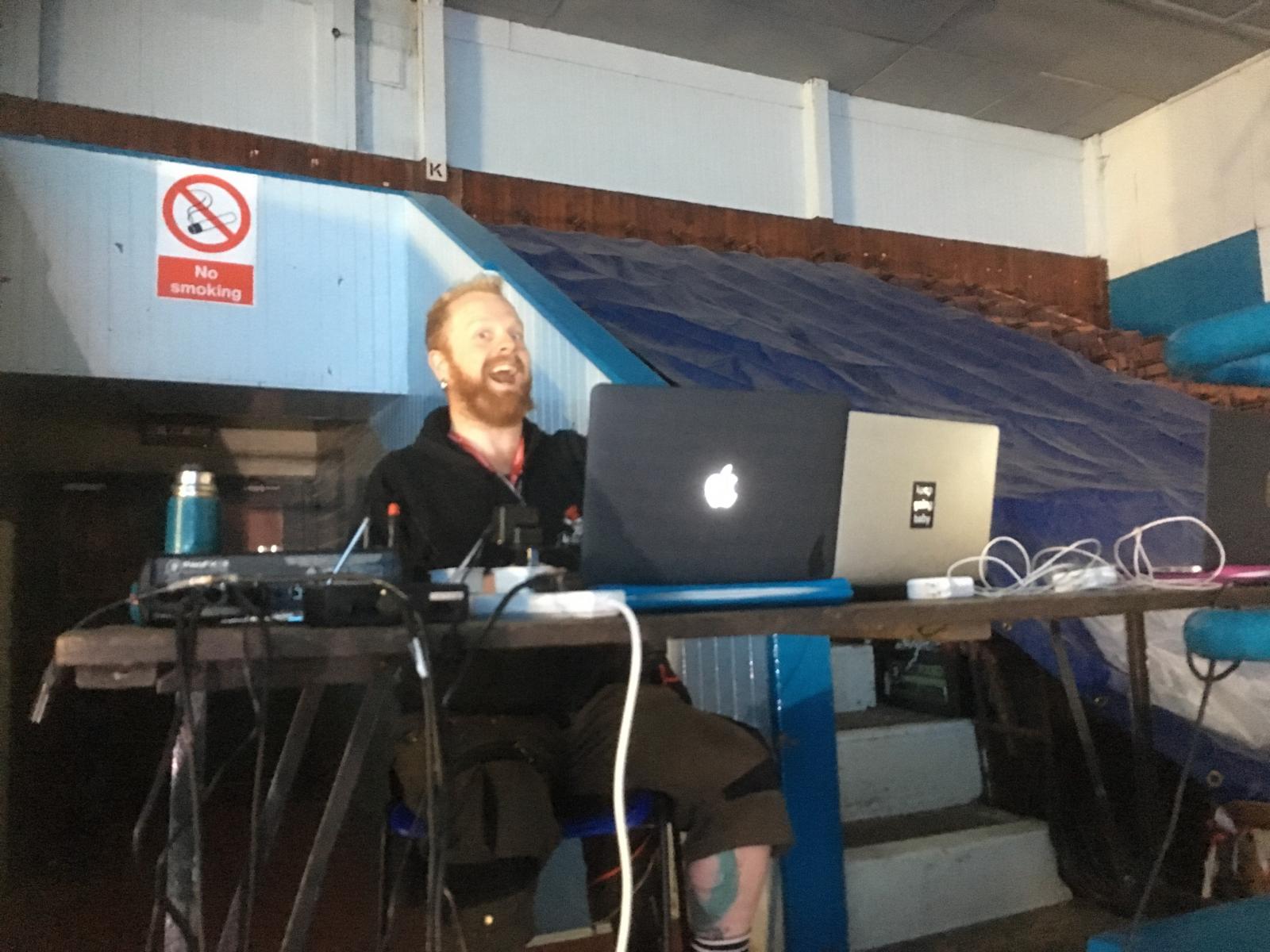 David Babin is the Technical Director of the Murrayfield Ice Rink.

We perform, train and rehearse in about 30 rinks per year. Amongst the hundreds of ice rinks I worked in during my career as a professional ice skater, I never encountered a venue as interesting as Murrayfield Ice Rink.

At the end of the 19th century, there was what some meteorologists called a « little ice age » The Thames froze yearly and ice-skating became a fad. Queen Victoria had skates made for herself and aristocrats organized outdoor parties where guests impressed each other’s with wobbly frolics. Figure skating emerged out of this. Then, during the Great War, Canadian soldiers stationed in the UK introduced Brits to ice-hockey. Although most people here finally chose to stick by a slower version of the same game played by kicking a round ball on a field desperately too big, a few hockey fanatics joined their voices to the ones of the first figure skaters: they wanted indoor refrigerated rinks. Very practically, new techniques of mass refrigeration were invented at the time.

So, Murrayfield Ice Rink was built in 1938. The original drawings, still hung in the administrative office of the rink were straight out of Fritz Lang's Metropolis. The final plan, although slightly more modest, kept a fair share of that Art Deco grandeur, which was so fashionable before it was associated with the wet dreams of fascist leaders.

When the Second World War started, the army requisitioned most rinks in the UK. Murrayfield's was used as an army depot until the 1950's. In London, some ice rinks and their huge refrigerated spaces were used as temporary morgues. Nothing so gloomy, here. While looking for a vacuum cleaner, some of our skaters/technicians/cleaners mistakenly opened the wrong door and fell on a room still packed with 1940's gas masks. Murrayfield is full of this kind of surprises.

After it's reopening in the 1950's, the rink was used as a venue for professional hockey games, basket-ball demos by the Harlem Globe Trotters and the boxing events of the 1970 Commonwealth Games. Up to 1000 skaters filled the public skating sessions on Friday nights. Faded posters still exhibited in the long brick corridors tell us about what went on here during the heydays of the 1980's and 1990's: shows by Torvill and Dean, WWF-style wrestling matches, gigantic rave parties, etc. Many things in the rink remind us of that begone past: a huge abandoned restaurant kitchen, stacked in dusty DJ booths hung 20 meters above the ice floor, collections of vinyls rivaling the trendiest hipster stores, beautiful 1950's turnstiles hidden in some basement storage. Exploring the forgotten depths of Murrayfield Ice Rink filled me with both awe and sadness.

Some users asked for modernization of the building. Hockey teams wanted the original 1938 wood and leather seats to be replaced by larger plastic seats. Some of the demo seats still litter a far corner of the tiered seating. Scottish National Heritage stepped-in, had the building listed and saved many of such unique features that are now part of the Fringe experience we are so happy to offer. Definitely worth the little tram ride...

Now, despite a dedicated and hard-working staff, Murrayfield Ice Rink is facing the same challenges as urban rinks elsewhere. The cost of the electricity needed for refrigeration is going up. Netflix and the addictive home-entertainment provided by the Almighty Algorithms is proving to be an unfair competition to anything involving going out. Gentrification of cities displaces the sport aficionados further and further from city centers while ice rink managers who grew in the ice-hockey culture find it difficult to understand the weird paradoxical needs and desires of new urbanites.

So while it's still there, you can use this contemporary ice-skating Fringe show as a pretext to visit Murrayfield Ice Rink. Maybe you'll want to come back for a Friday night disco public skating session after we're gone...